Can We Really Change the World?

“You may never know what results come from your action.  But if you do nothing, there will be no result.”
~Mahatma Gandhi

Those of you who have heard me lecture or read my new book know that I am a huge proponent of changing your thinking by following your intuition, or said another way, allowing your feelings to guide you.  Our feelings are the one and only thing that has the power to change the world.  Think for a minute about how much more powerful a feeling is than a thought.  It is the feeling about something that always spurs you into action.  The thought arrives, a feeling follows and then action takes place.  The magnetic field of our heart, when overlaid with the magnetic field of the Earth, is identical.  So what does that mean?  It means that our feelings and emotions have the power to change the actual magnetic field of the Earth if we allowed it.

Gregg Braden gives a great example of how powerful our feelings really are.  Our country has 2 satellites in space whose main job is, by the hour, to report back to the scientists on Earth a measurement of the Earth’s magnetic field.  The Earth’s magnetic field ebbs and flows in cycles but mostly stays in a fairly consistent wave.  One day, researchers were astonished when a reading showed a very large spike in the Earths magnetic field.  What on Earth (literally) could have happened to cause such a massive spike?

When traced back, the precise moment of the massive spike in the Earth’s magnetic field was at 9:00am on September 11, 2001…15 minutes after the first plane hit the towers in New York and the world was informed that the United States was under a terrorist attack.  A flood of pure, raw, unrehearsed emotions were set loose, not only changing the magnetic field of each individual person’s heart, but the magnetic field of the Earth itself.  Our hearts were not the only hearts affected on that day…the Earth heart took a hit as well; hence, the power of our feelings.

If you are of a science mind and still questioning the validity of what I am saying, that is ok.  I am a scientist by nature as well.  But remember, not everything can be explained and there are just some things that cannot be understood using the human mind.  Some things need trust, hope and faith to understand.  Some things we may never truly understand.  Understand it or not, the world still goes round and round.  Sometimes the things we least understand, by not understanding them and trusting, are the exact things we need in our life to change the world we know.

Embrace the unknown and with your feelings, help change the world!

Chris Sopa is founder and owner of Chris Sopa International, Inc. You can learn more about her at www.ChrisSopa.com. Find her at Facebook.com/ChrisSopaInternational, Twitter @ChrisSopa, LinkedIn, and Google+. 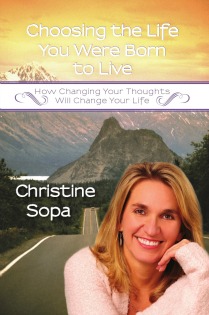 Purchase your copy of, “Choosing the Life You Were Born to Live:  How Changing Your Thoughts Will Change Your Life” by Chris Sopa published by Balboa Press.

“I Am Right; You Are Wrong”