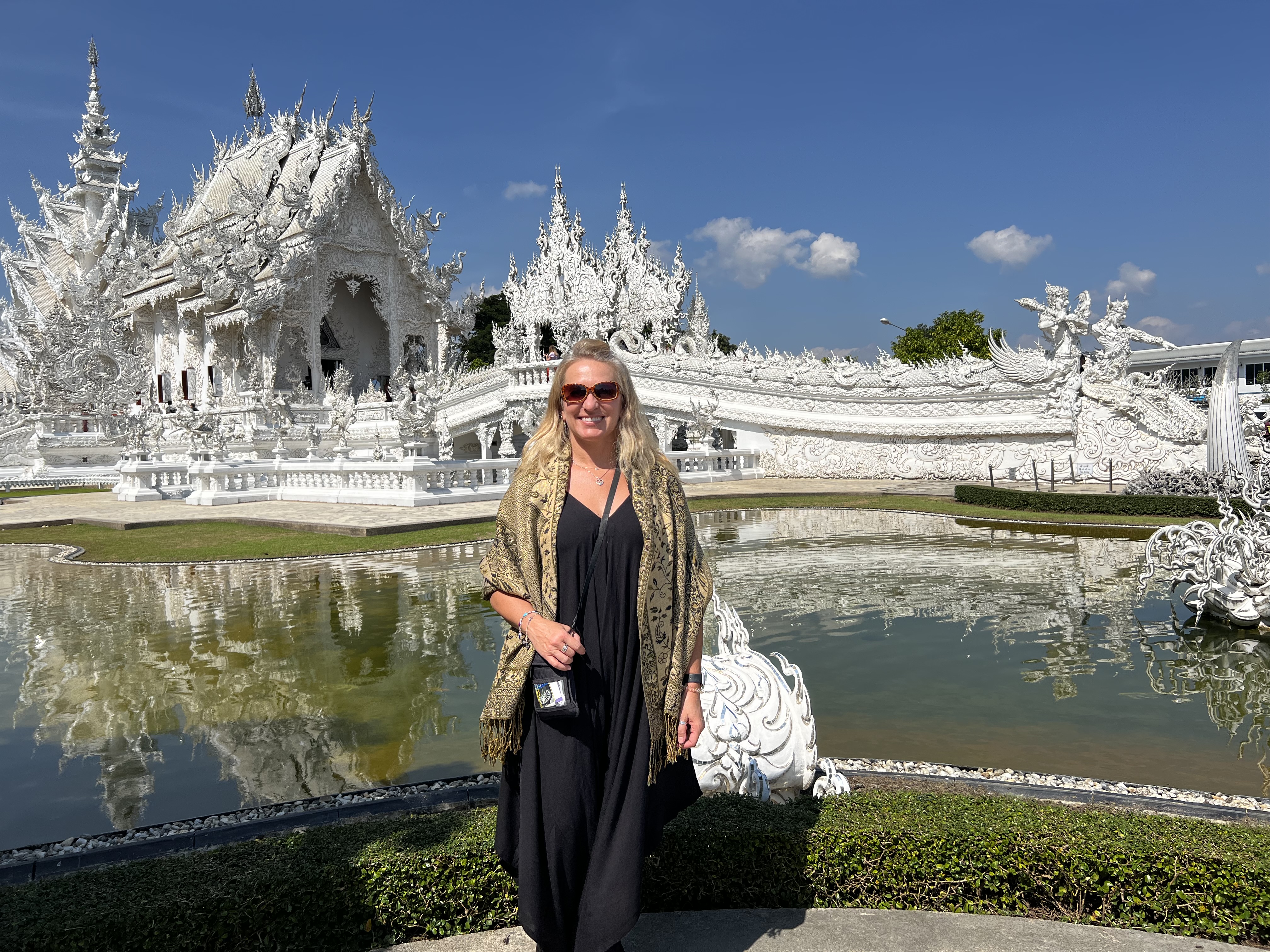 “I looked in temples, churches, and mosques. But I found the Divine within my heart.” ~Rumi

One of my rituals upon arriving in a new location is to check out my surroundings by taking a walk. Walking down the busy street of Nimman Rd. in Chiang Mai, Thailand I could not help but notice there was a temple every two blocks. Literally, there was a temple every two blocks! (I later learned that there are hundreds of temples throughout the city). Of course, since this was my first “temple rodeo” in Thailand I stopped at the first two or three to take in the beauty and awe of my surroundings. It was during my third temple visit that I met Mr. Noi. Mr. Noi was an elderly gentleman who was a retired tour operator and offered to take me on a tour of a couple of other temples in the area. One of the benefits of traveling alone is that people are not afraid to talk to you. I meet so many wonderful people on my solo travels! It was Mr. Noi who told me about the lantern festival. The lantern festival in Thailand is a yearly tradition that happens every November (the 12th month of their calendar year). Flaming lanterns are sent soaring into the sky and others are sent floating in the sea. The burning and releasing of the lanterns symbolize letting go of all the old pains, challenges, obstacles, etc. of this last year and welcoming new abundance, prosperity, and happiness. This is something I have seen in pictures and would have kicked myself if I had missed it. So grateful for Mr. Noi! 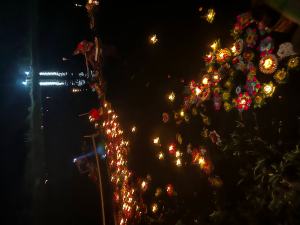 Floating lanterns in the water at the festival

Needless to say, I immediately bought a ticket for the first night of the festival. For the first couple of hours, I gorged on endless amounts of Thai food, watched beautiful traditional dances, and listened to the monks chanting in preparation for the lantern ritual. As I sat in the crowd of 3600 people, I found it odd that no one was giving instructions on how to light the lanterns. These lanterns were a good 3 feet tall and 2 feet wide and made entirely of paper mache with a ring the size of a grapefruit at the bottom that is supposed to be set on fire. I guess I thought that the ring would be easy to catch on fire and once it was lit, the lantern would magically take off. Nope. Apparently, there is a trick to the trade that many of us non-locals did not know. The lanterns work like a hot air balloon. Heat must build up in the lantern before it is able to float. To build up this heat, once the ring is lit, you are supposed to bring the lantern slowly to the ground until enough heat builds and the lantern floats away.

There were many factors that played into the tragedy of that night. One, many people did not know how to light the lanterns correctly so lanterns were catching fire before they were ready to take off into the sky. Two, it was an extremely windy night. Three, every decoration was made up of flammable material. And fourth, hay barrels were everywhere for people to sit on as chairs.

It was when my friend Jen who was lighting her lanterns on the other side of the crowd texted me saying, “So, we may die!” that I noticed it. As everyone was busy trying to figure out how to light their lanterns, no one noticed that a lantern hit the beautifully constructed temple in the middle of the crowd and set it on fire (Click the link below to watch the video and you will see the beautiful lanterns going off into the sky and then as I pan over the temple, you will see it on fire – and you will hear me repeatedly yelling “Oh shit!” – LOL!).

What was interesting about that moment was the first thing I thought was that it was done as part of the ritual. I remember thinking to myself, “Huh, wow, they even set the temple on fire. I wonder what that is all about?” Then I realized it wasn’t part of the ritual and my life flashed before my eyes. I immediately high-tailed it to the very small parking lot anticipating that very soon the 3600 people at the event with me would realize what was going on and there would be a stampede. As I quickly walked out of the circle of fire, I noticed that the beautiful tree that was filled with colorful paper lanterns was also going up in flames. My pace quickened. 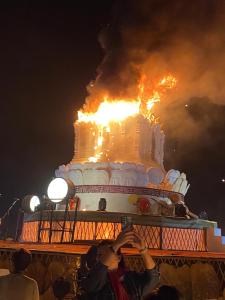 I made it out OK and to my knowledge, so did everyone else and no one was hurt. On the shuttle ride home, I remember thinking that I was so glad I bought a ticket for the first night because obviously there was not going to be a second night due to the fire. Not only did the second night go off without a hitch but they rebuilt the temple in a day! THEY REBUILT THE TEMPLE IN A DAY! And, apparently on the second night, they continually gave instructions on how to correctly light the lanterns to the crowd (yes, we learn from our mistakes!).

The formal definition of a temple is a “building” devoted to worship or a place gods or objects of religious reverence reside. Temples are not something that is a common site if you grew up in the United States. We may see the occasionally mosque, but there is not a temple every two blocks. I grew up Catholic and remember always hearing that our body is our temple. Our body houses a very precious gift…our soul. It also houses our emotions, wisdom, thoughts, and memories. These are our sacred “gifts” that must be protected at all costs. 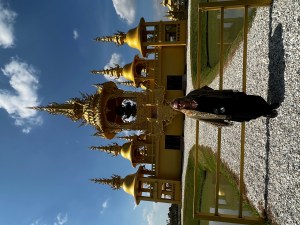 There are times in our lives when some of our gifts get accidentally “burned down”…we get hurt by someone we love, we find out we are ill, or a horrible memory haunts us. Sometimes, like in my case, we set fire to our own temples. We realize that we may have been paying reverence to something or someone that no longer serves us…this may be a job, a relationship, or even the place we live. I did not literally burn my apartment down in Scottsdale, but I “burned down” my life there in hope of finding another flicker or flame that would guide me to where I was supposed to be next. All I knew was that I did not belong there anymore. I could feel it. The Phoenix bird rebirths itself from the flames. The Thai monks rebuild temples in a day to give reverence to their gods on a holy day. They do whatever it takes to make this happen.

One of the reasons I travel so much is that I am on a quest for being awed. I love being awed by life and people! During my time in Malaysia, Bali, and Thailand I have been in absolute awe at the reverence and loyalty the people of these cultures show to their religion and the beautiful temples I have seen. In Malaysia, which is primarily Muslim, you hear their prayers 5-6 times a day over a loudspeaker. In Bali, which is primarily Hindu, you hear their prayers religiously at 6:00 am, noon, and 6:00 pm. Not to mention the time they spend daily making offerings that they leave at their temples, places of work, and homes. And in Thailand, which is primarily Buddhist, watching these amazing people stop what they are doing, walk into one of the many temples, bow, and sit silently in prayer in the middle of their day leaves me in awe.

My witnessing of these awe-inspiring moments in Thailand has made me realize that at any moment there can be a death and an instantaneous rebirth. It is all part of the cycle of life. We may not have control over what departs our lives all the time, but we do have the power to rebirth our lives whenever we choose. It is simply a choice. I am not saying that choice is easy, but it is there for us when we are ready to step into it. It just takes a little courage, a lot of faith, and sometimes a flame to get us moving. (wink-wink) 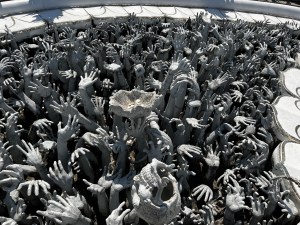 The creepy sculptured hands and skulls that greet you upon entering the White Temple.