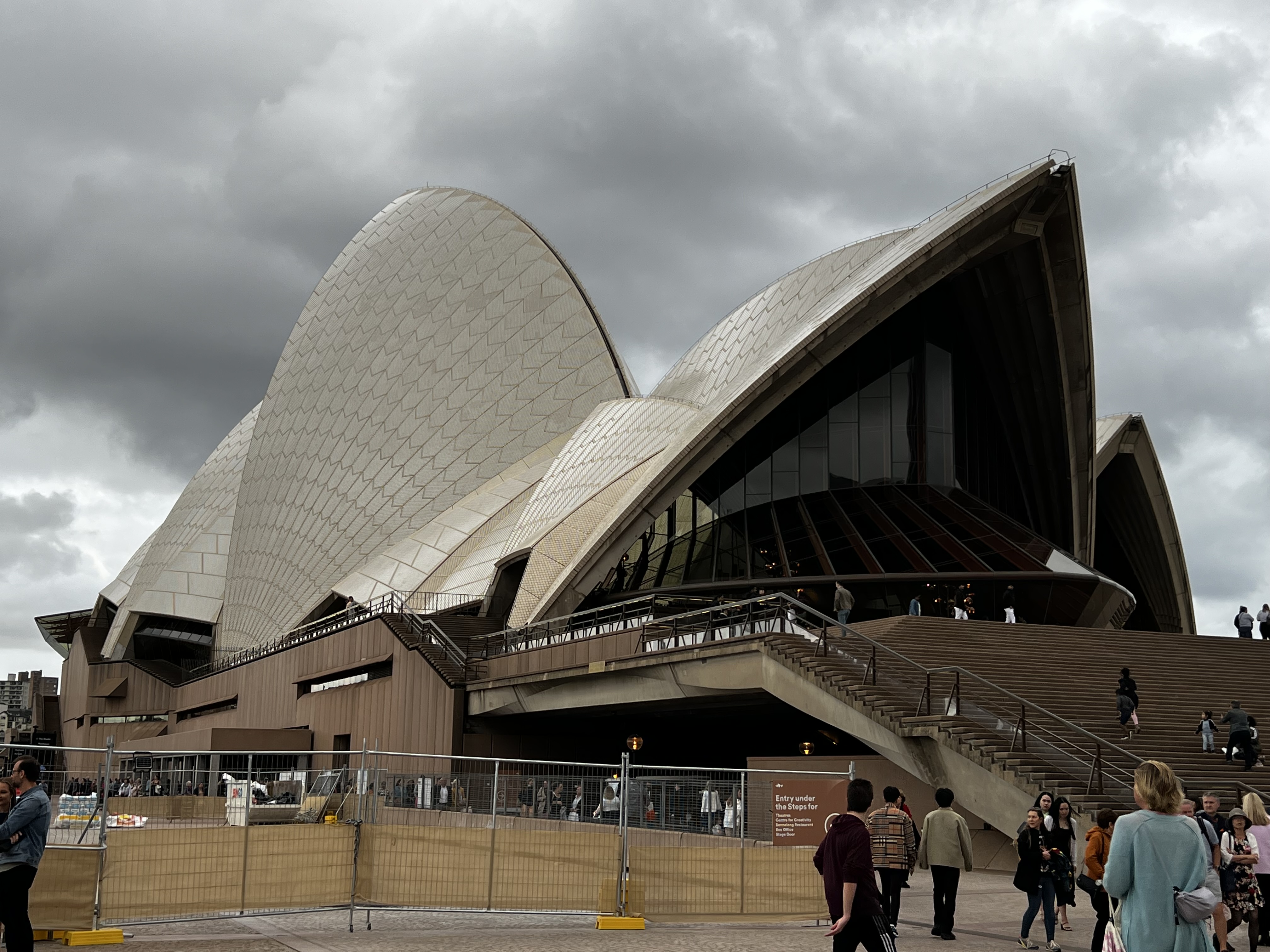 “When everything seems to be going against you, remember that the airplane takes off against the wind, not with it.” ~Henry Ford

I was ending my amazing two weeks in Melbourne, Australia and was headed for a short stay in Sydney. My flight was leaving at 7:00 am because I only had 3 full days in Sydney and the day I was leaving was day #1. I had tickets to a Christmas show at the Sydney Opera House at 5:00 pm (this is important to know for later) and I had planned to do some sightseeing near the harbor around lunchtime.

Normally, I pack an extra set of clothes in my backpack “just in case” I need them and on the off chance my luggage does not make it to my destination with me. On this sunny Melbourne morning, I decided I did not need to pack an extra set of clothes since my flight was only a short one to Sydney. Mistake #1. I arrive at the airport early, as usual, because for me early is on time and on time is late. I settled into the Qantas lounge, had my long black coffee, and headed to my gate. I boarded my flight, took my seat, and started reading my book. After awhile, I noticed that it was 7:15 and we had not taken off yet. At 7:30 the captain announced that they had found an issue on the “outside of the plane” (which sounded very eerie to me) and it was going to take the mechanics about 45 minutes to fix the issue. Forty-five minutes came and went. The captain then announced that it was going to take longer than expected and we all had to exit the plane and they would rebook us on another flight. There was a mass exodus off the plane and we all waited patiently for them to announce what gate we would be shuffled to for our next flight. As I was waiting, I met a couple that was headed to Las Vegas for the holidays and were worried about missing their connecting flight. I met a young man who was carrying a tuxedo because he was the best man at his friend’s wedding in Sydney that was taking place in just a few hours (it still blows my mind that he waited until that morning to fly to Sydney! LOL!). 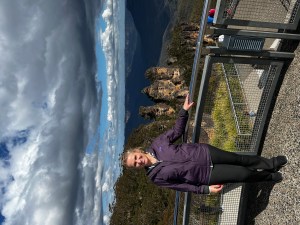 The beautiful blue mountains in Sydney with the “three sisters” behind me.

An hour later, we all boarded flight #2. Once we were all on board, we again were waiting. The captain (a different one this time) announced that there was a weird smell in the back of the plane and he was not comfortable flying the plane so we all had to get off and re-book AGAIN. It was now 10:30 am. This time, we were all on our own to re-book our flights. It is times like these when it is a major benefit to be solo because I can squeeze into any extra seat…just me, myself, and I. I ended up getting the last seat on the 12:00 flight to Sydney. At this point, I wanted a drink!

I boarded this flight, settled in and prayed that 3 times was a charm…until the captain came over the loudspeaker and told us there was an issue with the belt that was used to put the luggage on the plane. We needed to wait for them to fix the belt before we could take off. At this point, I know it sounds like I am making this up but trust me, you CANNOT make this shit up! After an hour and a half, we did finally take off and half the plane let out a cheer! 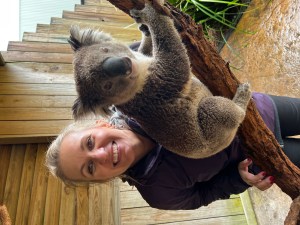 I have wanted to spend time with koalas since I was 3 years old! Bucket list item…checked!!

With all the commotion of changing planes I had not even given my luggage a thought. After 3 plane changes I knew it would be a miracle if my luggage ended up on the plane. If I could give you only one travel tip, I would tell you to put an Apple air tag in every piece of luggage you take with you. I have an air tag in both of my suitcases, my wallet, and my backpack. If you are not familiar with air tags, they are like tracking devices. I can see on my phone where each piece of luggage is at any time and my phone will also tell me if I left a piece of luggage behind.

When we landed in Sydney, the first thing I did was check my air tags and just as I suspected, both of my bags were still sitting in Terminal 1 in Melbourne. Great. At this point, it is after 2:00 pm and I began thinking about the event I had at the opera house…with nothing to wear but the jeans and t-shirt that were on my body. And of course, this one time, I did not pack a change of clothes. Ugh! When I arrived at the counter to file a claim for my lost luggage, the man that worked for Qantas could not even locate where my bags were with his technology (this was a bit unsettling). I was able to show him on my phone where they were and he put the information into the system so my bags could be located and put on the next flight to Sydney. 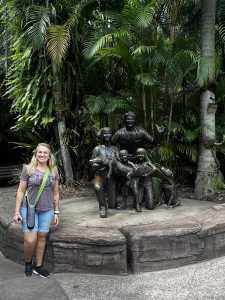 Me and the Irwin Family at the Australia Zoo!

When you have been traveling for almost 4 months and everything you own and need are packed into 2 suitcases and you lose those items, it is a bit unnerving. But here is the thing…I was not unnerved. During the entire “changing planes multiple times fiasco,” I was calm and just went with the flow. I focused on what I could control rather than what I could not control. I have found over the years that losing my inner peace for things I cannot control is not worth it. When we allow ourselves to go with the flow and breathe through the things that are happening around us, things always work out the way they are supposed to.

Over the years I have learned that one of the key elements to inner peace is to know yourself well. We must know what we need to feel centered and comfortable at the moment. Here is what I knew about myself…I did not really care too much about what I was going to wear to the opera house (it was a casual event anyway) but I did know I wanted to wash my face and have something comfortable to sleep in that night. I had to work off of the assumption that my luggage was not going to make it and put my comfort first. I took an Uber to my hotel and high-tailed it to the H&M store which was a 10-minute walk from my hotel. I bought underwear, socks, yoga pants, a pair of shorts, and a t-shirt to sleep in. Check. Then I stopped at Sephora and bought eye makeup remover and cleanser. Check. I practically ran back to the hotel to freshen up because now I only had 30 minutes until the show started at the opera house. During this time, I was consistently checking my phone to see where my luggage was…and it was still over 400 miles away which told me it had not moved from Melbourne.

Call me crazy, but this is my favorite souvenir so far!

I went to the Christmas show and had to consciously practice present-moment awareness. I did not want to be distracted by my luggage…I wanted to enjoy this amazing show that I was sitting in the Sydney Opera House for! Every time I began to worry about my luggage and what I would do if it got stolen or never showed up, I took a deep breath and focused my attention on the show. (I had to do this about 100 times in an hour and a half, by the way!) After the show, I checked my phone and my luggage was on the move! By the time I got back to my hotel, my luggage had made it to Sydney but it was still sitting at the airport. When I got to my room, I changed into my comfy clothes and immediately felt better. Bag #1 appeared at 11:30 pm and of course, that was the bag that had mostly souvenirs in it. Bag #2, which had all my clothes and toiletries, was MIA. After several calls to Qantas customer service with no luck, I decided to go to bed. At 1:45 am the front desk called to let me know my second bag arrived. I have never been so happy to see my torn up, red, heavy suitcase that I have been lugging around for the last 4 months!

The amazing thing about experiences like this is that they give us a chance to evaluate how far we have come. The Chris of the past would have panicked, not gone to the show at the Opera House, and possibly bailed on my trip altogether. When my luggage was in hand and I was able to look back on that crazy day, I was extremely proud of how I kept my composure, was still kind to people around me, stayed present enough to enjoy where I was and what I was experiencing, and most of all trusted that everything happens for a reason. If my luggage was lost, so be it. That would give me an excuse to shop! Luckily, this wasn’t the case but I got a much bigger gift in the process…the gift of knowing that no matter what challenge life throws at me, I have the inner resources to handle it.

I have been through a lot of life experiences on this trip…my “near-death” experience” at the lantern festival in Thailand, being harassed in Bali, losing my luggage in Sydney, and many smaller ones in between. During it all, I have allowed myself to fully experience what was in front of me, good or bad, and have learned to take the lesson the experience was meant to teach me and leave the emotions of the experience behind. When we carry an experience with us in our minds, it is like we live it over and over again. We are truly the cause of our own suffering.

With only two weeks left of my amazing journey, I plan to get the most out of it that I can…good or bad, luggage or no luggage.

See you in New Zealand! 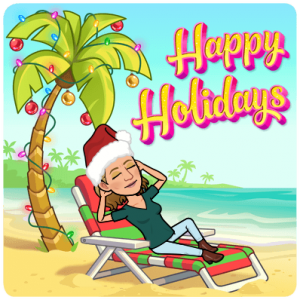 What is Your Story?