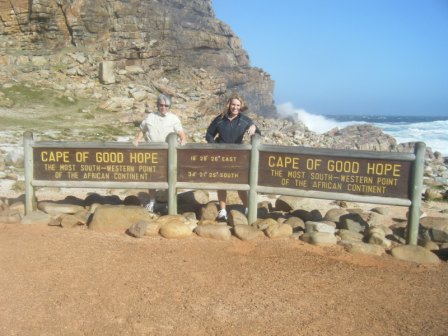 As we mentioned in our last post, we ended up checking out of the B&B we were scheduled to be in due to lack of internet service and distance from where we needed to be.  Sad, because it was a cute little place but where we ended up…OH BOY!  We feel like we are living in a condo!!  Before we left, Tina was so happy because they had a washer and dryer and since she only brought 6 pair of undies (not sure what she was thinking!), she has been giving a new meaning to the word “commando” for a couple of days.  Needless to say, she now is “covered!”

Our morning was a little off due to having to find a new place to stay and then actually getting there but all ended up ok.  Tina and I have been doing an awesome job, I must say, staying in the moment and just allowing things to happen as they will.  This keeps us in a state of squeezing everything we can out of every moment we are here.

We ended up taking the half-day afternoon tour headed to The Cape of Good Hope.  This area is the southwestern most point of South Africa and is where the Atlantic and the Indian Oceans meet.  Thabani was our tour guide and he was a hoot!!  We were in the van with a couple from Austria and another couple from Whales.  Thabani was cracking jokes the whole time about where each of us were from.

It was a quite eventful ride (it took about an hour and a half) and we stopped a few times along the way.  As we were passing a beautiful beach off of the Atlantic Ocean, Thabani pointed out to us the FULL-TIME shark spotters on the beach.  The shark spotters sit up over the cliff with binoculars and have different colored flags that warn the guard on the beach if there is a shark in the area.  This happens quite often due to the fact that the sharks mistake the people for seals!   If you saw the movie “Jaws” – that is the shark we are talking about.  They are ALL OVER the waters in Cape Town!!  (Vin you would be in heaven!!)

We then stopped to see the penguins and found out their nickname is the “Jackass Penguins” due to the fact that when they make noise apparently they sound like a Jackass!  (A few people I know came to mind….  :))  They so reminded me of the movie “March of the Penguins!”

Tina and I then decided we had to use the restroom and upon entering the stall noticed a box on the back of the toilet.  To our surprise and laughter (loud enough for the entire place to hear!) there were boxes of FREE condoms in every stall!  Seriously though, this is a way South Africa is educating people on safe sex so as to prevent the spread of AIDS.  (NO – Tina and I did not take any!!)

Only Tina and I would take a picture of condoms!

We started our drive again and were warned about the WILD BABOONS!  These guys are EVERYWHERE!!!  Apparently, they have been fed too much by tourists so are now on the violent side and actually try to jump in peoples cars to get food.  We passed a mama and her baby on the side of the road….SO CUTE!!

We finally almost got to our destination when we stopped again for a bit to climb up to a lighthouse overlooking the Indian Ocean.  It became very apparent as to why they call Cape Town the “windiest city in the world!”  Tina almost had to cash in my life insurance policy because I literally almost got blown off the edge while going up.  TINA IS MY HERO…SHE SAVED MY LIFE!!  (tears of joy and gratitude flowing).   We were so “blown away” at the top, we decided to take the Funicular (a flying Dutchman-kind of cable car) back down mainly due to the fact that I was having a hard time remembering where I put my life insurance policy!!

Lighthouse view-you have no idea what it took to take this picture!!

Once we got back to our “palace” we decided to order pizza and beer.  We were soooo happy!  We also noticed that this is the first post that we do not have a picture of us drinking an adult beverage….on the other hand,  we also just noticed that we talked about drinking an adult beverage and happen to be drinking one as we type so maybe this whole paragraph is totally pointless!

On to tomorrow where we are going to be…wait for it….DRINKING!!!  (full-day wine vineyard tour!!)

Here’s for “hoping” for a good day tomorrow…

That’s What I’m Talkin’ About!