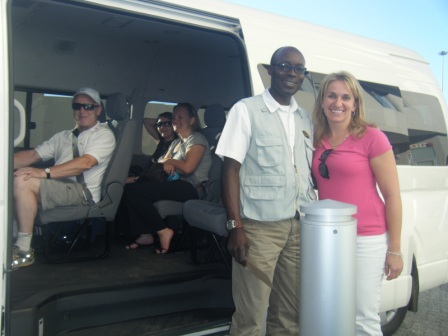 That’s What I’m Talkin’ About!

We woke up to a perfect day – the weather was glorious as we ate our breakfast.  It continued to be glorious as we boarded our chariot for the Wine Country.  Our guide’s name was Issy and we shared our tour with Brian (Connecticut/England), Patrick (Ireland), Steffi (Oman) and Franca  (Dubai), Patrick and Veronique (France).  It was truly an international group.

Chris and Issy with the “gang” in the background

South Africa produces 900 Billion Liters of wine per year and 40 different varieties.  Our first stop was at Zevenwacht Winery where we sampled 4 wines (at 9:30 in the morning!) along with 5 different aged cheeses made by the winery.

Our second stop took us to Stellenbosch in the Cape Winelands District.  We learned that they plant rose bushes at the end of every row of grapes for 2 reasons: aesthetics, but more importantly because the rose bush and the grape vines have similar physiology but the rose is more sensitive.  Any disease or insect manifestation will hit the rose bush before it hits the grape vines which is like a pre-warning system.  They can just look at the roses and tell what’s going on in the grape fields.

“I never promised you a rose garden…(sing with me!!)”

A rose between two thorns…Patrick, Tina and Brian at Rickety Bridge

We had extra time in Stellenbosch so we shopped at the local “flea market”.  We found some great gifts and two awesome paintings we are bringing home.  Chris was obsessed with finding a new pair of sunglasses since she accidently broke her diva red ones at the B&B.  We found a really expensive pair at the corner shop and after the exchange rate, they came to about $ 3.00!  Can you say “The Fly?”

April…start making space on the wall!!

This will go perfect with my international “decor” in my house!

After breaking the bank at the flea market our driver bought us fresh strawberries for the next leg of the trip.  Imagine how strawberries used to taste when you were a kid…. The best ever? Well that is how these tasted.  We stopped for lunch and our second wine tasting at “The Rickety Bridge” winery.  By the time we ate our lunch we had polished off 8 different wines and just to mix it up a bit, we ordered… wait for it… wine with our lunch!  We learned a new word from the Xhosa language “Mholowene” which means hello to a group of people.

Before our final tasting, we stopped at Drakenstein, the third and final prison where Nelson Mandela served time under house arrest.  They had a beautiful monument in front of the prison in his honor.

Our last wine tasting stop was at Laborie Estate in the Paarl Region.  We tasted 4 different wines plus 1 aperitif which was a blend of Brandy and one of their sweeter wines.  After 8 hours we had tasted 13 wines total and were feelin’ fine! Chris and I seemed to be re-living the “white girl dance” moment in our minds and could not stop laughing on the way home.  We were LOAO!!!

By the end of the day Chris was speaking in a Spanish accent for no apparent reason (actually I think it’s because she got hit on by a Spanish speaking Romeo!)  I had to get at least one dig in since I have been the victim for several days in a row now.

We had dinner at a great local restaurant called Beluga, had a deep conversation about the meaning of life and headed to bed so we can catch the first cable car up to Table Mountain in the morning.