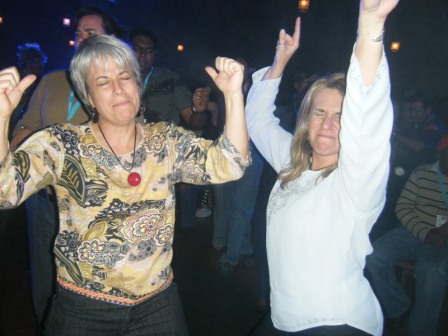 Well we slept through breakfast because we were so exhausted from the last two days.  We met up with Zali for the Opening Day of the Congress before Chris had to give her Keynote.  The Keynote was extremely well received by all 300 participants – Chris had a mile long line of people wanting to thank her, ask her opinion on various matters, and one gentleman even invited her to possibly speak in the UK next September. (You know where I’ll be next September! “The Chris-Tina Road Show”) We were invited to attend the evening “Mixer” which was an Irish Pub Evening.  They served “Pub Food” (Chris was relieved there was no Ox-Tail!) and, you guessed it… wait for it… BEER!  We each started the evening off with a Guiness Stout and ended with a gallon of water! We sat at the “Celebrity Table” with two South African celebrities: Helen DeBois a Singer who has written a theme song for SANBS that will be released next year, and Marisa Bosman who stars in a “Soapy” (“Sopa” Opera) called ISIDINGO. We were treated to a Singing Competition by each of the Blood Center Regional Groups.  They had to come up with a blood donation related theme song and sing in the competition.  We had “The Blood Clots”, The Twilights who dressed like vampires, and there was even a group that did an Abba medley and they named themselves the ABBO’s (get it – blood types!) “The Blood Clots” singing their song – THEY WON!

After dinner we danced our Arses off to the Blarney Bros. Band.  They played Irish tunes, American tunes, and we even did the African Hokey Pokey (sorry Genevieve, no Polka’s!).  We were amazed at how many people got up and sang and danced the entire night.  There is an incredible love of life that is palpable here – no one can resist the urge to celebrate and dance.  Talk about living in the present time! So tomorrow we are off to Cape Town and everyone has said such great things about it soooooo we are soooooo excited!